A Guide to the Denali Transit Bus: Comparing the Transit Bus and the Narrated Tour Bus

Denali National Park is an incredible six million acres of mostly undeveloped and protected land. The park is home to the highest point in North America, wildlife, high alpine tundra landscapes and many mountain peaks.

Here are some things to know about Denali:

When To Visit Denali National Park 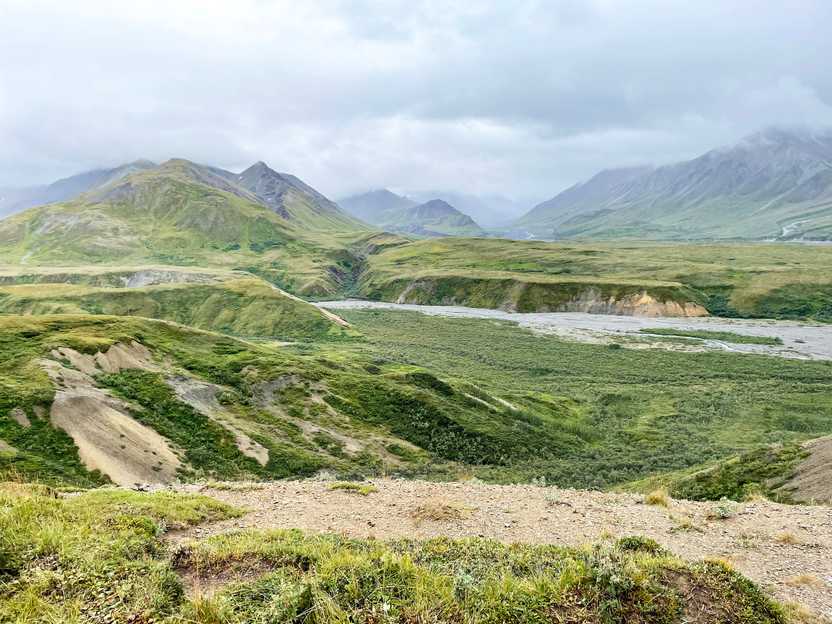 Note that as of this writing, an ongoing landslide inside the park at mile 45 could impact bus service in 2022.

Summer is the time when the vast majority of visitors go to Denali National Park. Transit bus service into the park typically begins on May 20 each year, but the buses do not go down the entire road until June. The summer season ends in mid-September.

If you visit in the spring or fall, buses will not be available and services will be limited, but this can still be a great time to see wildlife and explore certain parts of the park.

Typically, each year in September Denali hosts a “Road Lottery” for permits to drive private vehicles on the Denali park road. Visitors can apply to win the permit to drive as far as they can. An extra fifth day of the lottery is dedicated to active duty military service-members and their families. Unfortunately, this event has been cancelled for 2021 due to a landslide.

In the winter, vehicle access is limited but you can explore the park by skis, snowshoes or even dog sled.

This blog post is based upon my experience of visiting Denali in August and taking the Denali transit bus.

The Denali Tour Bus vs the Transit Bus 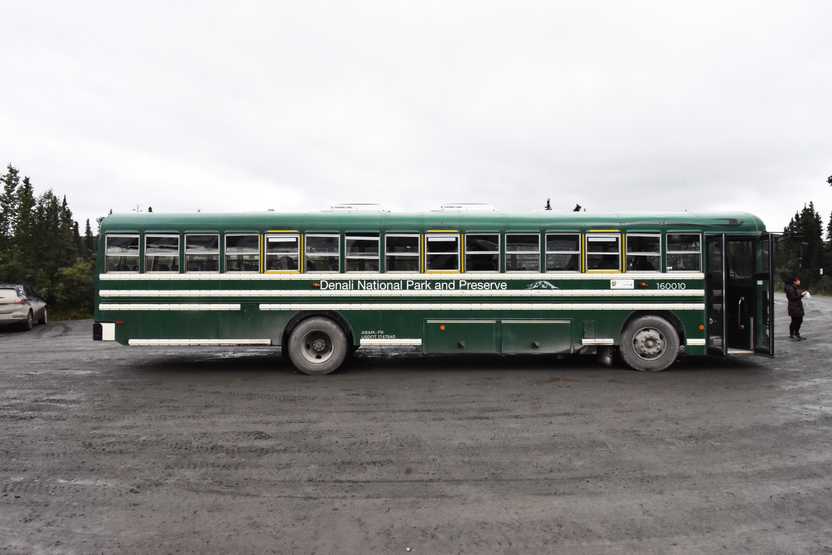 Denali National Park is unique in that there is only one road that goes into the park. This is especially wild when you consider that the park is larger than the size of New Hampshire. The road through the park is 92 miles long, but private vehicles are only allowed to drive the first fifteen miles of the road. After the first fifteen miles, the road becomes unpaved and only park buses and authorized vehicles are allowed.

The national park offers two different types of bus journeys into the park. There is a narrated tour bus and non-narrated transit bus.

Which bus is for you?

The non-narrated is best if you are interested in disembarking for a hike or a picnic, or if you would like to see the park with more flexibility and at a more affordable price.

The narrated tour is best if you have no interest in hiking and would like to learn as much as possible about the park.

When should you book Denali bus tickets?

The narrated tour bus was sold out by the time I went to book, which was two months in advance of my visit in August. If you know you would like to do the tour in 2022, reservations open on December 1, 2021.

What to Expect on the Denali Transit Bus 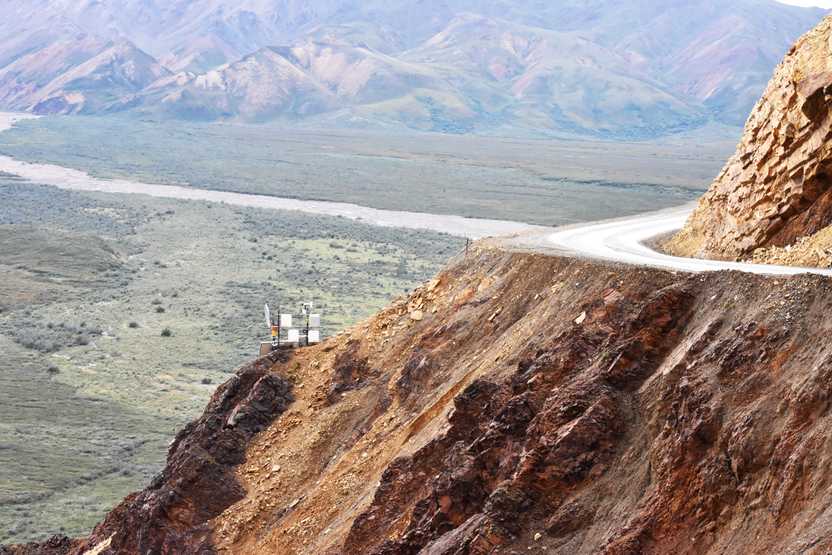 The Denali Transit Bus was an amazing way to see the park, spot wildlife and learn a little bit along the way. I took the bus to the Eielson Visitor Center at Mile 66, which was the furthest destination offered in 2021. The round trip bus to mile 66 lasts 8 hours, and can extend if you decide to disembark and explore. Due to time constraints, I got on the last bus of the day which left the depot at 2pm. This meant that I stayed on the bus the whole time without any hiking. I would recommend getting an earlier bus time and giving yourself time to hike or have a picnic along the way.

If you plan to hike from the transit bus, you will wait on the side of the road for any other green transit bus to pick you up. Be sure you check ahead of time when the last bus is expected so that you don’t end up stranded. Whether you are hiking or just enjoying an overlook, know that the transit buses do not wait around and count everyone. They follow a schedule whether you’re there or not, so don’t delay in getting back on the bus.

The buses are almost exactly like the old school buses that I rode to school growing up. The windows didn’t all stay shut and there is no restroom on the bus. However, they do have individual seats instead of bench seats, heating and air conditioning and overhead space for your things. While the leaky windows made for a cold trip, the transit buses are very sufficient for exploring the park.

What to Bring on the Denali Transit Bus

You will need to bring your own food and drinks on the bus as there are no services available along the way. You should also bring layers on the bus and depending on the weather, consider bringing a blanket.

If you plan on hiking, you should definitely carry bear spray but you will be asked to put it in your pack for the bus trip. There were signs I liked that said “There are no bears on buses so there is no need for your spray to be accessible.”

Finally, I recommend bringing a zoom lens and/or binoculars to enjoy spotting and photographing wildlife during your trip.

The bus takes about four hours each way between the bus depot and visitor center. After the first 15 miles, the road becomes unpaved and the bus travels about 20 to 25 MPH. While the road is unpaved, I found the bus ride to be pretty smooth for the most part. My bus route stopped three times for restrooms each way, plus another stop for an overlook without restrooms.

The entire route has amazing scenery. You will begin in a forested area but soon go above the treeline and into the tundra. As you reach higher elevations, the mountains surround you in all directions and vast valleys open up with streams criss-crossing in all directions. A portion of the ride involves driving on a windy road built into the mountains. If you are very afraid of heights, this might not be for you.

Some highlights of the trip scenery included:

When Glacier ice melts, silt is carried down downstream, giving the streams a milky-color described as glacial milk.

At Mile 53, there was a small gift shop at the Toklat River Rest Stop. In addition, there were moose and caribou antlers that you could pick up and use in photos! Finally, if you have taken an early bus and have spare time, the Eielson Visitor Center has a couple marked trails with great viewpoints on both sides of the road. These would be good short hikes if you have time!

The Wildlife in Denali National Park

While the scenery was amazing, I found the wildlife to be the best part of the Denali transit bus experience. I saw four out of five of the “big five” mammals commonly spotted in Denali: moose, caribou, dall sheep and grizzly bears (the fifth that I didn’t see was a wolf).

The transit bus stops for wildlife and everyone is asked to remain quiet while watching the animals. The animals have gotten used to ignoring the buses and the park service does not want them to hear people nearby and become interested. 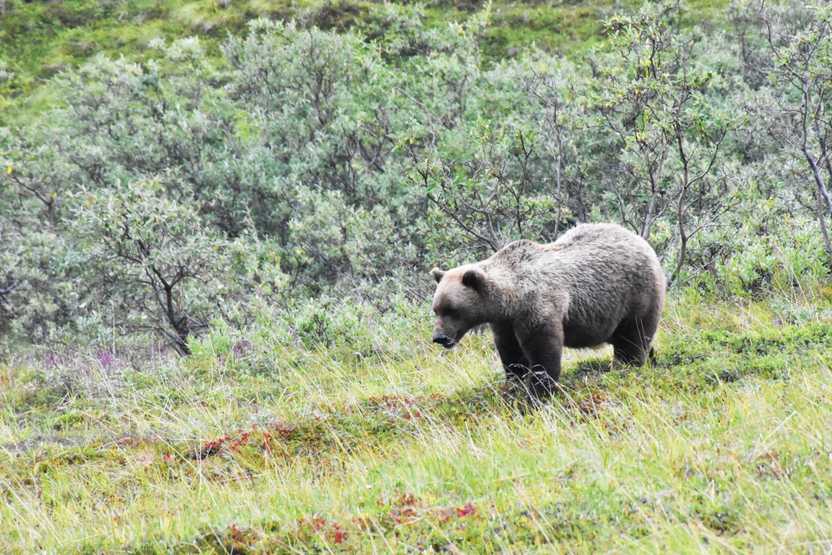 Grizzly bears are very active towards the end of the summer as they consume berries to bulk up for winter. I saw a gigantic grizzly bear less than 100 yards from the road devouring as many berries as it could with urgency. I also saw another smaller grizzly bear running. 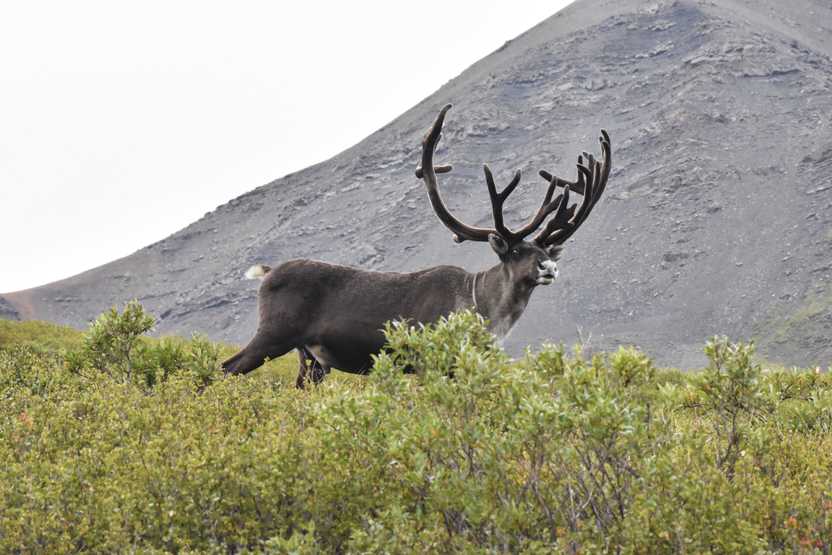 Throughout the journey, I saw at least a dozen caribou. The herd of caribou in Denali is the only barren-ground caribou herd in North America that is not hunted. Currently, there are about 1,750 caribou in the park.

It was from a huge distance, but we also saw dall sheep up high on a mountain. These animals tend to stick to the ridges and steep slopes of the high mountains. 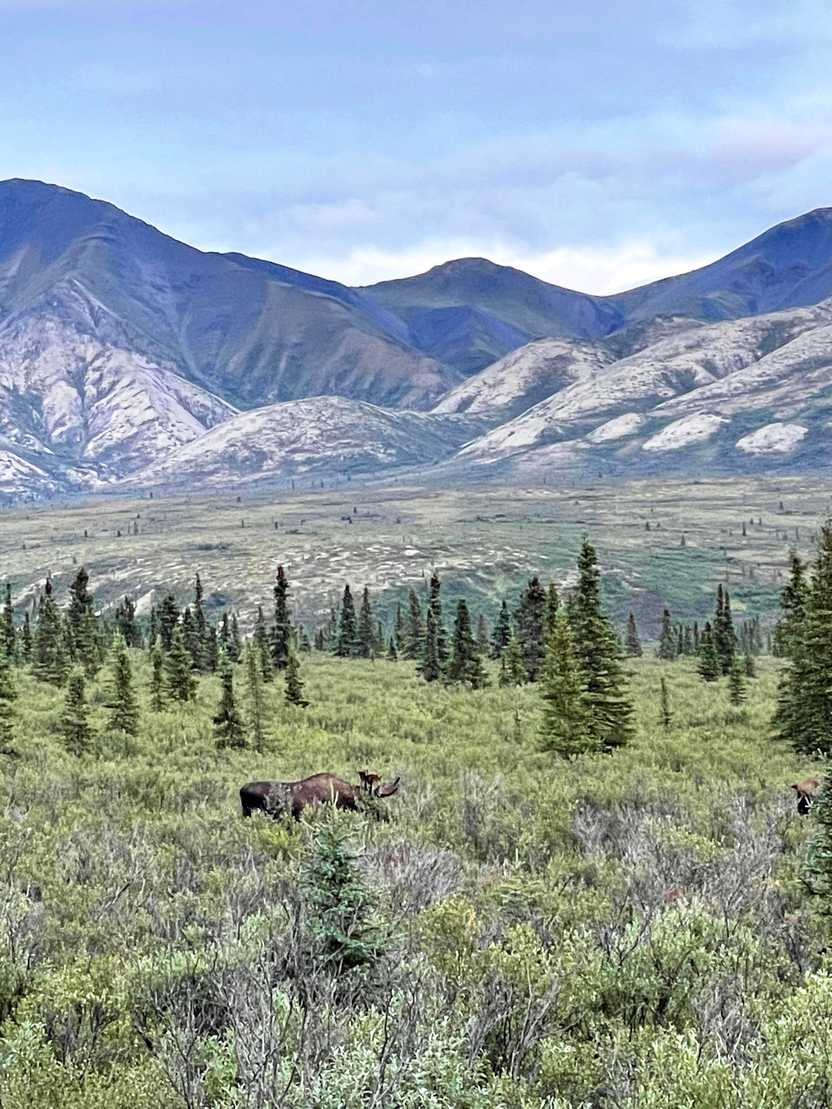 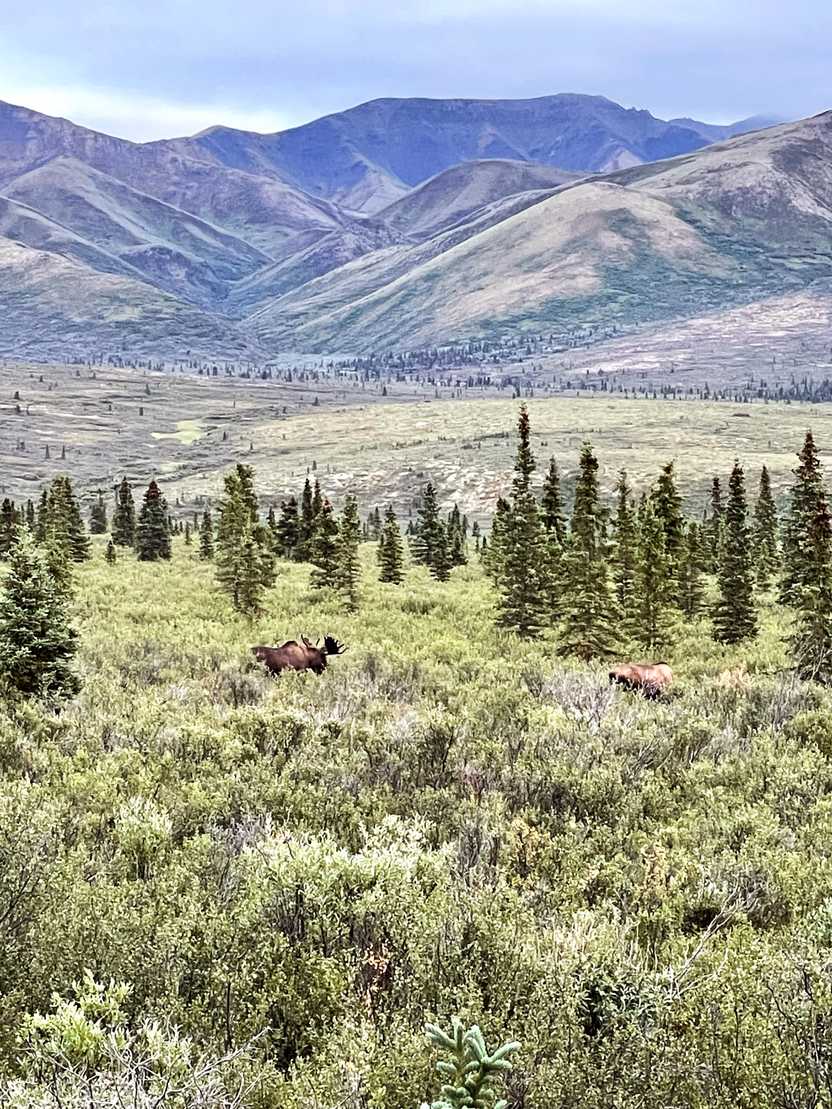 Moose tend to hang out near the lower elevation areas of the park near forests, lakes and marshes. I saw three moose during my last hour of the bus ride. They were along the paved road, so in an area accessible by car. These creations are so fascinating to watch and it’s amazing to see the sheer size of them!

As a bonus, we also saw a porcupine during the tour. Other small mammals you might spot include marmots, pike and foxes.

The great thing about wildlife is that you can see them no matter the weather! Since I visited on a particularly foggy day, seeing the wildlife was a highlight of the park.

One thing I did not see during my trip to Denali was Mount Denali. While the summer months are most accessible to visitors, they are also the wettest months of the year, meaning you are even less likely to see the mountain. It turns out that only about 30% of visitors see the mountain. The more time you can spend in Denali, the more likely you are to see the mountain, as the weather is always shifting quickly.

At the Eielson Visitor Center, there is a daily sketch showing when Denali has been visible in the past month.

Overall, I highly recommend the transit bus for exploring deeper into Denali National Park. However, there is a lot more to explore in Denali in addition to the bus. Check out my blog post with the best things to do in Denali to continue planning your trip!

Stay tuned, I will have another blog post that covers where to stay and other things to do during your trip to Denali National Park.

The Top Things To Do in Bryce Canyon National Park

A Guide to Visiting Denali National Park: The Best Things To Do in the Summer

The Ultimate Guide to Exploring Glacier National Park in September

A Guide to Visiting Denali National Park: The Best Things To Do in the Summer