Mother Neff State Park is known as the “Mother of Texas State Parks.” The historic park is located in central Texas 40 minutes from Waco, an hour and a half from Austin and two hours from Dallas. The park is relatively small but is a relaxing place to connect with nature and history.

Please make it a priority to Leave No Trace when exploring the outdoors. This includes leaving nothing behind, respecting wildlife, minimizing campfire impacts, respecting those around you, planning ahead and traveling on durable surfaces. For more details, read about the seven principles at lnt.org.

Mother Neff State Park is special for being one of the first Texas state parks! The central Texas land was first purchased by Noah and Isabell Neff in 1852. They loved the land and invited many friends and neighbors to gather, camp or host events along the river. Isabel was known as ‘Mother Neff’ among friends, hence the park’s name today. Their son, Pat Neff, went on to become the governor of Texas.

When Isabel Neff died in 1921, she willed part of the land to become a Texas state park (before the Texas state park system was actually created). With the help of Governor Neff, more of the property was later donated to the state and the park officially opened in 1937.

The CCC was crucial in the park’s creation. They built a pavilion, recreation hall, stone tower and concession stand for the park in the 30’s.

Things to Know About Mother Neff

Mother Neff is home to 250-acres of prairie grasses, a limestone cave, the Leon River and the Wash Pond Creek. Unfortunately, the Leon River has flooded many times, causing closures of the park and campgrounds throughout the years.

In 2015, the park built a new park headquarters and a camping loop to stay open during floods The reconstruction also included a new park entrance. I was impressed with the visitor center and grand pathway upon entering.

If you stay long enough, you might hear some loud noises. The McGregor SpaceX facility is 6 miles north of the park and is responsible for loud explosion noises during rocket engines tests.

You can bring your dog along while visiting Mother Neff, just make sure it stays on a leash! Also be on the look out for snakes, coyotes and a variety of birds and insects.

Mother Neff is home to some of the nicest campsites near Dallas! The park has 20 full hookup campsites with water, sewer hookups and electricity. There are 15 tent campsites as well but they are currently closed due to flood damage.

The campsites and bathroom facility are newly built and very nice. The sites are spacious and reasonably secluded. Many are shaded among the trees, while a few are in the prairie area and a lot more exposed.

One detail I loved about the campsites was the little library where you can take a book or leave a book. It’s a great addition for kids or for adults looking to enjoy reading while experiencing nature.

There is also a lodge available to rent for large groups. The facility sleeps eight people indoors and has capacity for eight people outside in tents. The lodge has a full kitchen, air conditioning, a furnished living area and more. 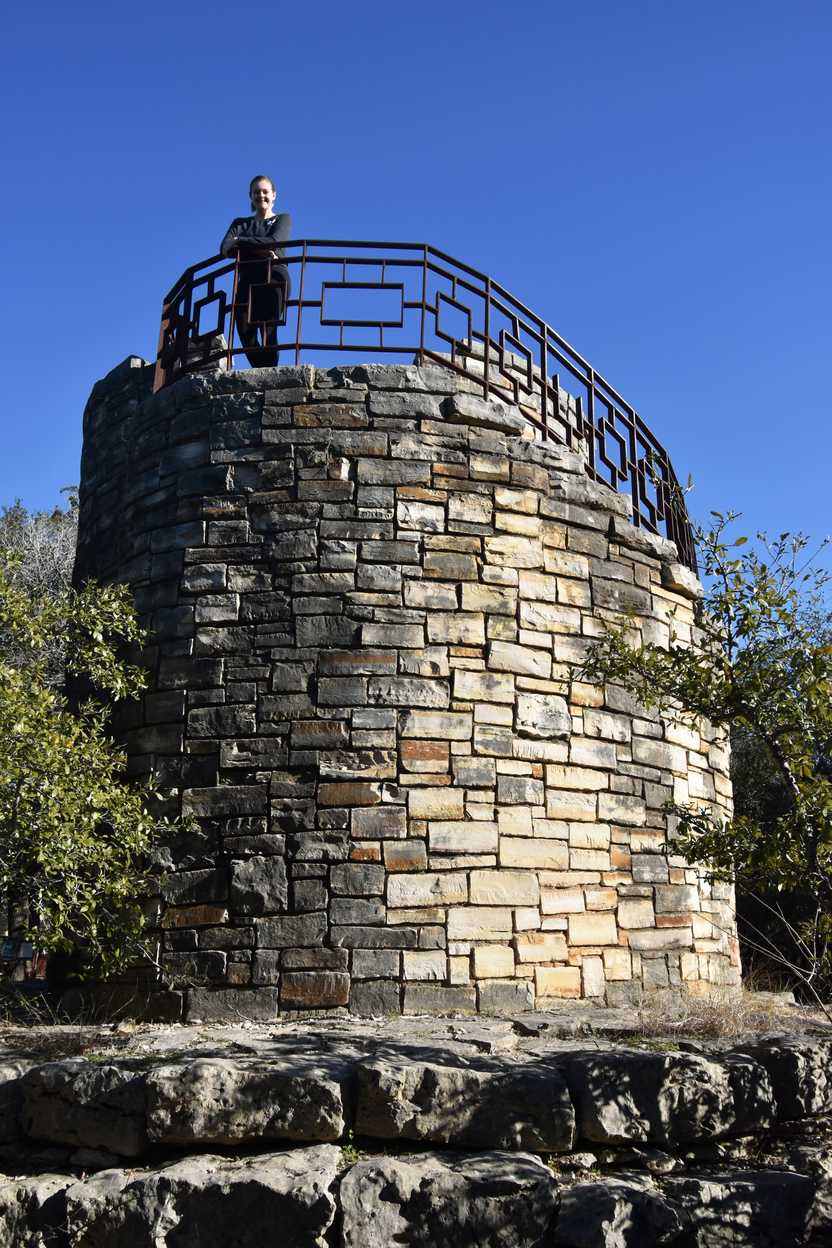 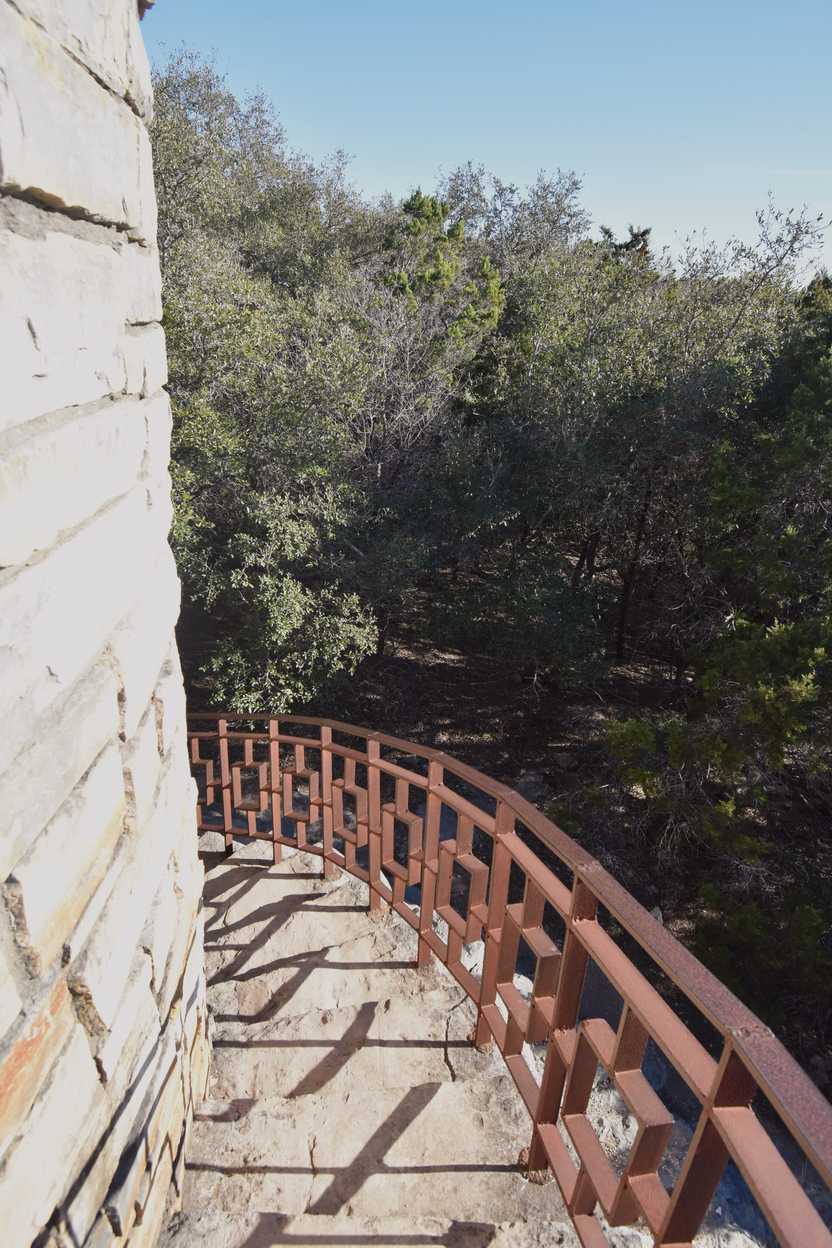 Mother Neff has 3.5 miles of trails where you’ll find a cave, ponds, a CCC-built tower and more. The trails all connect so you can do them all at once if you’d like.

Make sure you visit the Tonkawa Cave and the Rock Tower. Tonkawa Cave is on the cave trail and accessible by steps from a nearby parking lot along with by trail. The cave is a rocky overhang of limestone carved away by Wash Pond Creek. It was likely inhabited by the Tonkawa native people thousands of years ago.

The Rock Tower was built as a water tower by the CCC. Take the spiral staircase to the top for a view of the forest and surrounding area.

The Rock Tower and cave are south of the campgrounds in the forest area of the park, where you’ll also find some small secluded ponds. North of the campgrounds, there are trails that cross the prairie with little shade. A historic bell on the Pond Trail makes for an interesting stop; it was used by the CCC to call workers for dinner and meetings.

Blue Hill Ranch is a non-profit accommodation located 15 minutes away from Mother Neff. They provide care to injured and orphaned animals of many sorts; giraffes, zebas, kangaroos, otters and more.

You can stay in their cabins or book a tour or an experience with the animals. Experiences include bottle feeding giraffes or other animals and playing or swimming with otters. All are sure to make for a memorable experience. Blue Hills has two cabins that can be booked up to 30 days in advance.

Waco is the largest city near Mother Neff, located 40 minutes away. There are a variety of restaurants and accommodations to choose from there. A couple notable activities include the Mammoth National Monument, which is a paleontological site where you can see the bones of a group of 24 mammoths from the ice age.

You can also visit the famous Magnolia Silos, a shopping, bakery and hang-out space created by Chip and Joanna from the tv show Fixer Upper.

Things To Do in Pedernales Falls State Park