The city of Amarillo is a quirky small city located on Route 66, known most notably for Cadillac Ranch. Along with Cadillac Ranch, the artist and prankster who sponsored Cadillac Ranch, Stanley Marsh 3, has commissioned other installations around the city as well.

While Amarillo is worth checking out, Palo Duro Canyon State Park is the real gem of the area. I am continually impressed by Texas State Parks, and this one is no exception.

How to Get To Amarillo

I drove from Dallas, TX to Amarillo and it was a 5 and a half hour drive. If you are flying, you should fly into the Amarillo airport, which has direct flights from Dallas, Houston, Las Vegas and Denver.

When to Visit Amarillo

Like everywhere in Texas, Amarillo experiences high heat in the summertime and mild winters. Fall and spring are the best time to visit for the weather. I visited in March and it was sunny and clear but not too hot.

Where to Stay in Amarillo

If you like camping, I recommend camping in Palo Duro Canyon, it has well kept campsites and you’ll have the easiest access to seeing the park. They have recently added “glamping” options in the park as well, which are furnished cabins with air conditioning and even porch swings.

If you don’t want to stay in the park, there are a wide variety of options of hotels in Amarillo. You can stay at the Big Texan Motel for a more unique experience with a Texas shaped pool and a western vibe, or pick your favorite hotel chain of choice. Palo Duro Canyon is only a 30 minute drive from Amarillo.

Here's how to enjoy the best of Palo Duro Canyon and Amarillo in 2 days!

Palo Duro Canyon State Park offers incredible views, hiking and camping. It is known as the “Grand Canyon of Texas,” for good reason, being that it is the second largest canyon in the United States after the Grand Canyon.

There are countless beautiful rock formations, from steep canyon walls to caves and hoodoos. You will see layers of rock in striking orange and will likely run across wildlife like wild turkeys, an endangered species known as the Palo Duro mouse and members of the official Texas State Longhorn herd.

The most popular trek in the park is the hike to Lighthouse Rock, a 5.7 mile round trip hike to a unique rock resembling, you guessed it, a lighthouse. The largest portion of the hike is flat as you walk through the desert, but the final stretch to reach the base of Lighthouse Rock is a short but steep climb. We really enjoyed this hike, but be mindful that the trail has very little cover so you should be prepared with plenty of sunscreen and water.

After seeing the most famous rock formation, I recommend hiking along the river on the Juniper Riverside Trail for a bit of a change in scenery. In the springtime, the trail is lined with wildflowers.

Also consider the Rock Garden Trail, a trail lined with boulders that goes up to the rim of the canyon. Be sure to also check out the “Big Cave,” a beautiful cave that is right off of the road.

In the summertime, the park also has a live TEXAS outdoor musical that is fun for families. Also of note, there is no cell reception in the park, use this time to unplug and enjoy the insane natural beauty of Texas.

I was blown away by this park, it is absolutely worth the 5 and a half hour drive from Dallas.

Reward yourself after a day of hiking with some delicious wine with great views. Only a 15 minute drive from Palo Duro Canyon is Bar Z Winery, a great place to unwind and enjoy Texas wine and a relaxed atmosphere. You can also park your RV or van here as a part of a Harvest Hosts membership.

Cadillac Ranch is the most famous display of outdoor art around Amarillo and a must-see while you’re in town. Installed in 1974, Cadillac Ranch has been a fixture of Route 66 ever since.

The installation has ten Cadillacs sticking out of the ground at supposedly the same angle of the Great Pyramid of Khufu in Cairo, Egypt. You can bring your own spray paint and paint whatever you’d like onto the Cadillacs. I recommend going early to beat the crowds, as many tourists flock to this unique destination.

I grew up reading a book on roadside attractions, so visiting Cadillac Ranch was extra special! To me, the unique destination represents the wide open road of Route 66 and is a symbol for the American road trip.

Route 66 goes through the center of Amarillo and there is a historic district in town where you can shop for antiques and enjoy some lunch.

Check out the 806 Coffee + Lounge for breakfast, coffee or drinks in a cool, moody atmosphere, Golden Light Cantina for a Route 66 vibe serving burgers and beer, and The NAT Antiques & Collectibles for some antique shopping and souvenirs.

Combine City, Ozymandias of the Plains and Floating Mesa

These are several other roadside art installations that you should drive by while you’re in town. Combine City, built by farmer Orville Ladehoff, is similar to Cadillac Ranch, but with combine tractors instead of Cadillacs. You cannot spray paint these vehicles, you can only look from on the other side of the fence, but it is still worth driving by.

Ozymandias of the Plains was created by the same billionaire as Cadillac Ranch, Stanley Marsh 3. The sculpture is made up of giant legs sticking out of the ground. It is meant to represent the ruins of Egyptian king Ozymandias, as described by Percy Shelley in a poem published in 1818. It was apparently vandalized with giant socks for many years, but when I visited in March 2020 there was graffiti covering the socks.

Another creation by Stanley Marsh 3 is the Floating Mesa. This consists of a reflective strip around the top of a mesa, meant to make the mesa portion above it look like it’s floating. This is a little far from the road and there wasn’t a good place to pull over, so expect to just view it from your car.

The Floating Mesa is far from the road and a bit hard to spot. In order to see it, make sure you are driving from the east and not the west. 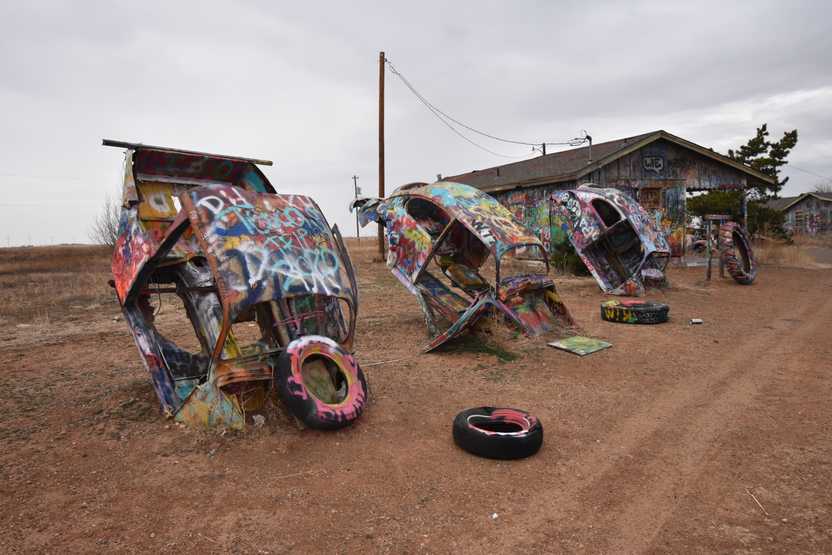 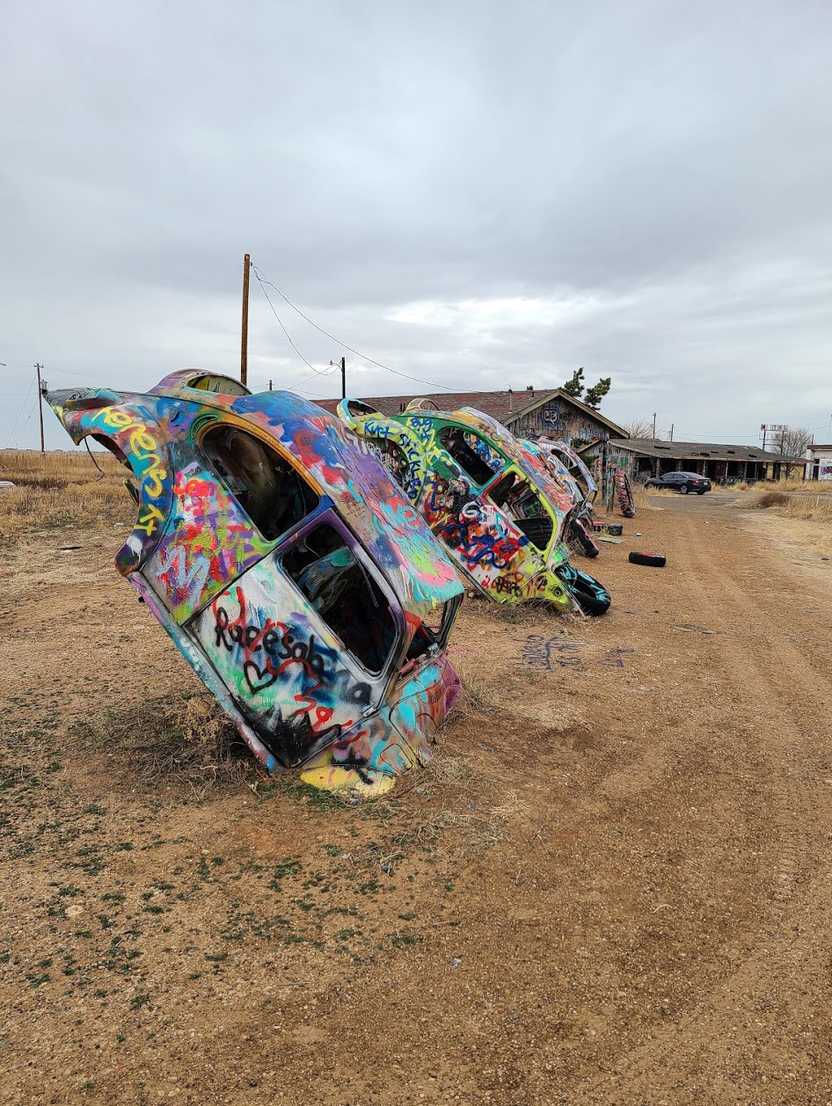 The Slug Bug Ranch, a parody of Cadillac Ranch, is located about 30 miles east of Amarillo. It was created in 2002 to lure people into the Travel Plaza across the street. The travel plaza only lasted about a year, but Slug Bug Ranch remains.

As a driver of a Volkswagen Beetle, I personally really enjoyed this place. There is an abandoned building next to the bugs and the whole area feels like a beautiful, abandoned playground. There was also no one else there while we were there, which was a stark contrast against the busy Cadillac Ranch. I recommend taking the time to see this place along with Cadillac Ranch if you’re in Amarillo.

I might be biased as a big Volkswagen beetle fan (I drove a yellow bug for 8 years) but I preferred the Slug Bug Ranch to Cadillac Ranch.

If you have more time

Check out my blog post to get all of the details you need for visiting Caprock Canyons.