The Best Day Hikes in Bryce Canyon National Park: Hike Among the Hoodoos

Bryce Canyon National Park is home to the largest concentration of hoodoos in the world. Gaze over one of the many viewpoints overlooking the Amphitheater and you will see an incredible display of orange hoodoos, all unique and different. The overlooks are fantastic, but in my opinion the best way to experience Bryce Canyon is by hiking down between the hoodoos and seeing them up close.

What is a hoodoo?

A hoodoo is a tall, thin spire of rock that is created by erosion. In Bryce, the erosion of the hoodoos is caused by water seeping its way into the cracks of the rocks, freezing and expanding. The hoodoos continue to erode today. The average rate of erosion is measured at 2 - 4 feet every 100 years. While some change is inevitable, humans can help preserve the hoodoos by staying on the trail system. Just walking up to the base of a hoodoo will shorten its lifespan.

What to Bring While Hiking in Bryce 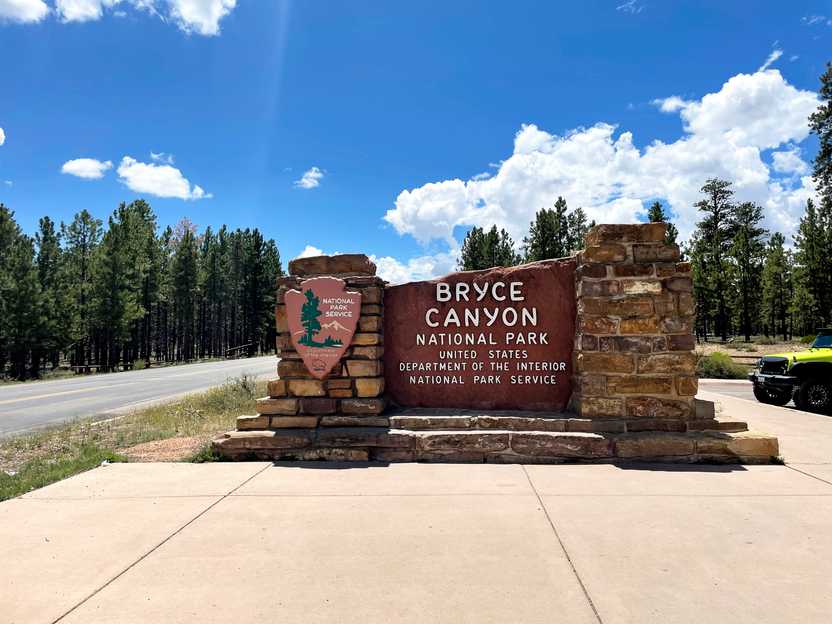 Other Things to Know Before Hiking in Bryce

Are you visiting Capitol Reef in addition to Bryce? Check out my blog on how to spend one perfect day in Capitol Reef National Park.

When To Visit Bryce Canyon

Bryce remains open year round, but winter brings freezing temperatures and storms. There are typically freezing temperatures every night from October to May, with the heaviest snow from December to February. If you don’t mind braving the cold, Bryce is beautiful when it’s dusted in snow and there will be very little crowds.

July and August are monsoon season in Utah and there are often thunderstorms in the afternoon. Hike early and be off the trails by the afternoon, and seek shelter immediately if there is any lightning nearby.

June and September are arguably the best times to visit Bryce in terms of weather. Both months have mild temperatures and the chance of thunderstorms is lower.

I have visited Bryce in May and July and had great weather both times. In July, I did have to make sure to be off the trails before an afternoon thunderstorm.

This blog post covers the details on two incredible day hikes in Bryce Canyon: The Figure Eight Trail and the Fairyland Loop. 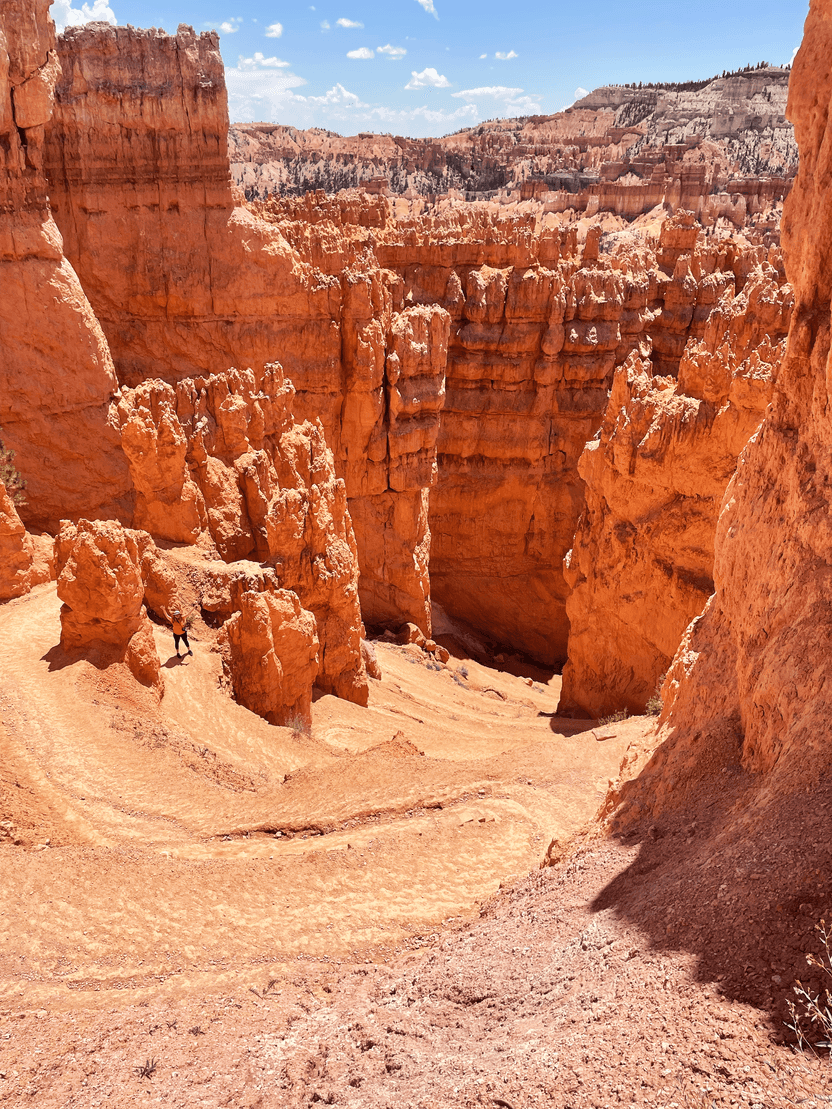 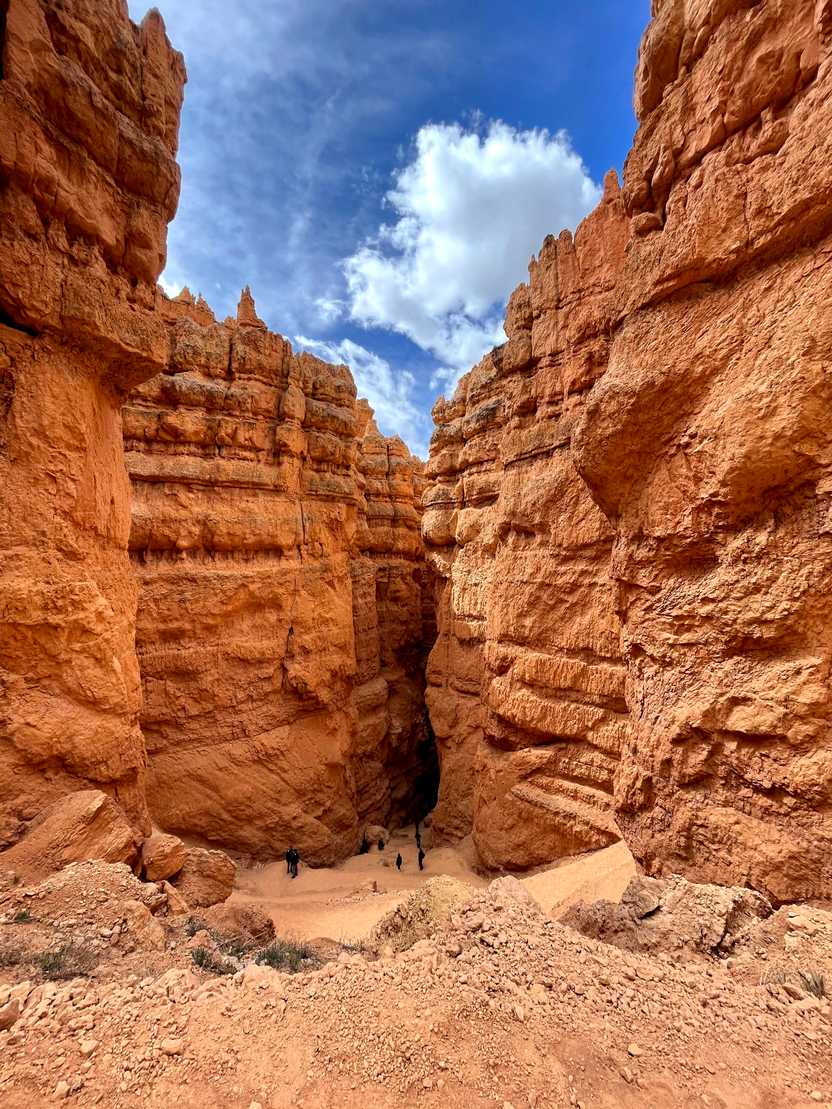 Wall Street on the Navajo Loop

The Figure Eight Trail refers to the combination of three trails: Queen’s Garden, Peekaboo Loop and Navajo Loop. This trail is incredible and if you only have time for one hike, this is what I recommend.

I recommend starting at Sunset Point and hiking down the iconic Wall Street. You could also begin at Sunrise Point or Bryce Point, but hiking down Wall Street will allow you to climb down in the steepest area so that your climb back up (via Queen’s Garden) will be more gradual. 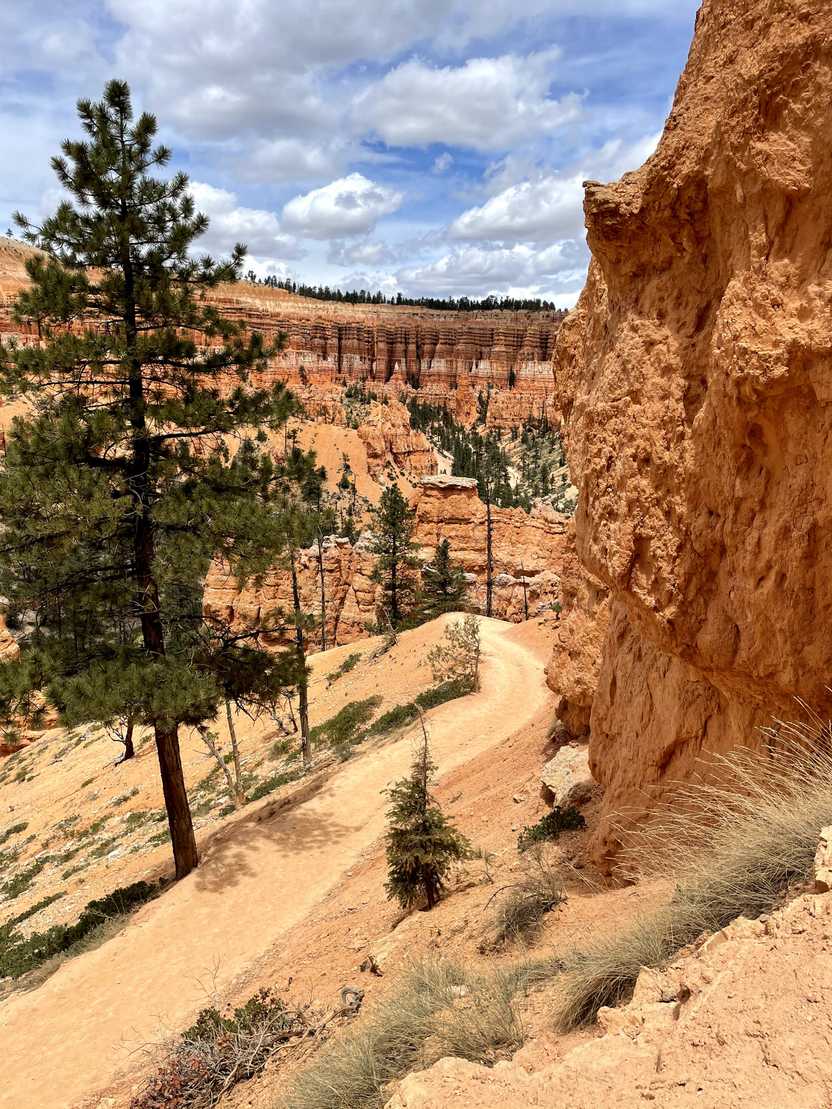 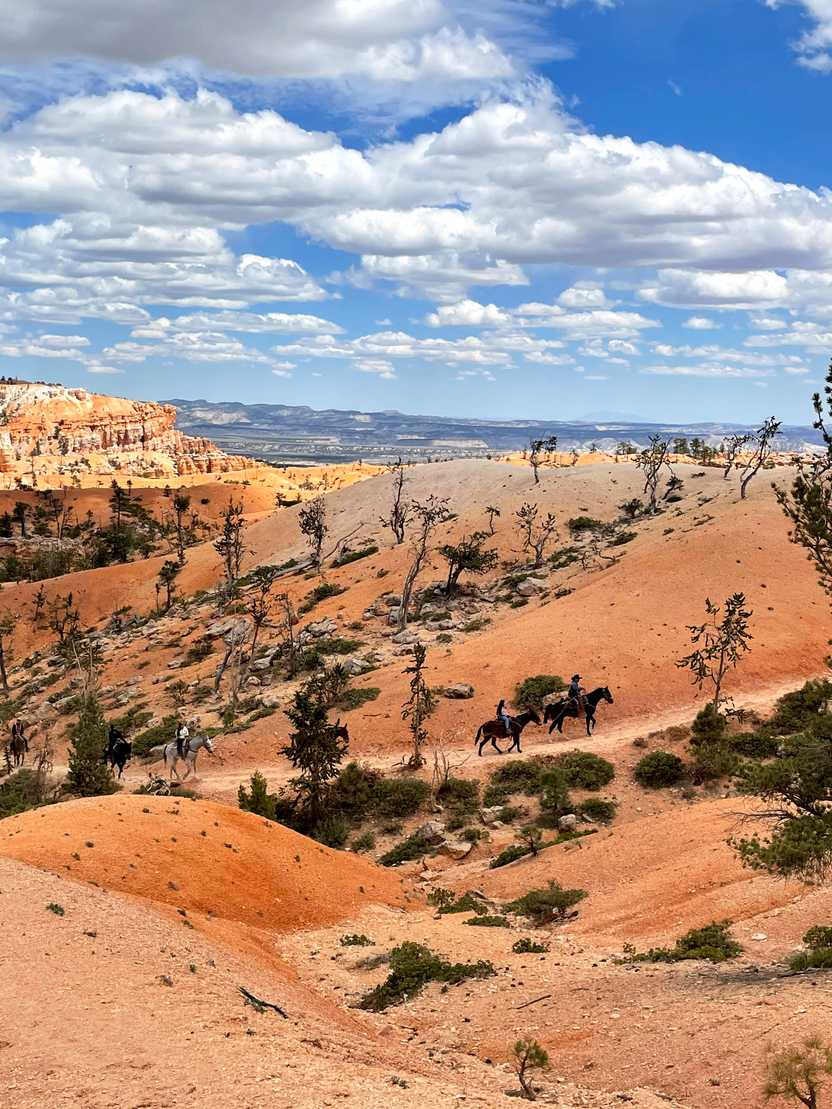 Hiking down Wall Street is an experience in itself. Iconic switchbacks descend down into the canyon steeply and the rocks become more narrow as you climb down. After you conquer Wall Street, the trail levels out on the canyon floor and you will begin to see trees scattered around the hoodoos. When you reach a fork in the trail after 0.8 miles, go to the right and hike about 0.2 miles until you reach the Peekaboo Loop Trail.

The Peekaboo Trail is a 3 mile loop that will take you through several ups and downs with incredible views along the way. I hiked the loop clockwise, which allows for a slightly more gradual climb up and you will save the very best views for the second half of the loop. I love this trail because there are multiple mini rock tunnels where you will one side of a cliff face and exit another. One of the best parts of the trail was walking by the Wall of Windows. There are two huge “windows” in the cliff that have been created by erosion. There are also a few instances of switchbacks on this trail that wind down between canyon walls much like Wall Street.

The Peekaboo trail is dusty and steep at times. It is more difficult than the Navajo and Queen’s Garden trails, but also much less crowded. There is also a restroom right off of the trail about halfway through the Peekaboo Loop.

After the Peekaboo Loop, join back to the Queen’s Garden Trail and continue the last two miles of the hike. The climb back up is gradual but slowly gets steeper in these last two miles. Be sure to take a short spur trail to see Queen Victoria around the 5 mile mark, this hoodoo looks remarkably similar to the Queen Victoria statue in London. Then at 5.5 miles, see if you can spot ET Hoodoo, a rock resembling ET’s head.

When you reach the top, take the rim trail about a half mile to meet back up to your original starting point of Sunset Point. The entire trail is full of beauty and the perfect way to experience Bryce Canyon.

The Fairyland Loop trail is an amazing trail if you’re looking for a less crowded hike that is a little more challenging. The trail has the youngest hoodoos in the park and offers spectacular views throughout the journey.

I began the trail at Fairyland Point, which is outside of the Bryce Canyon fee gate. There is limited parking here, so arrive early to claim a spot. You can also reach the beginning from the Rim Trail near Sunrise Point. If you start from Sunrise Point, it adds about 0.4 miles to the hike.

I hiked the trail counterclockwise in order to climb down the steeper portion and have a more gradual climb back up. The first two and a half miles are along the rim trail, which is paved but has a steady incline. You will pass the North Campground along the rim, which is a great opportunity to use a restroom before entering the canyon. 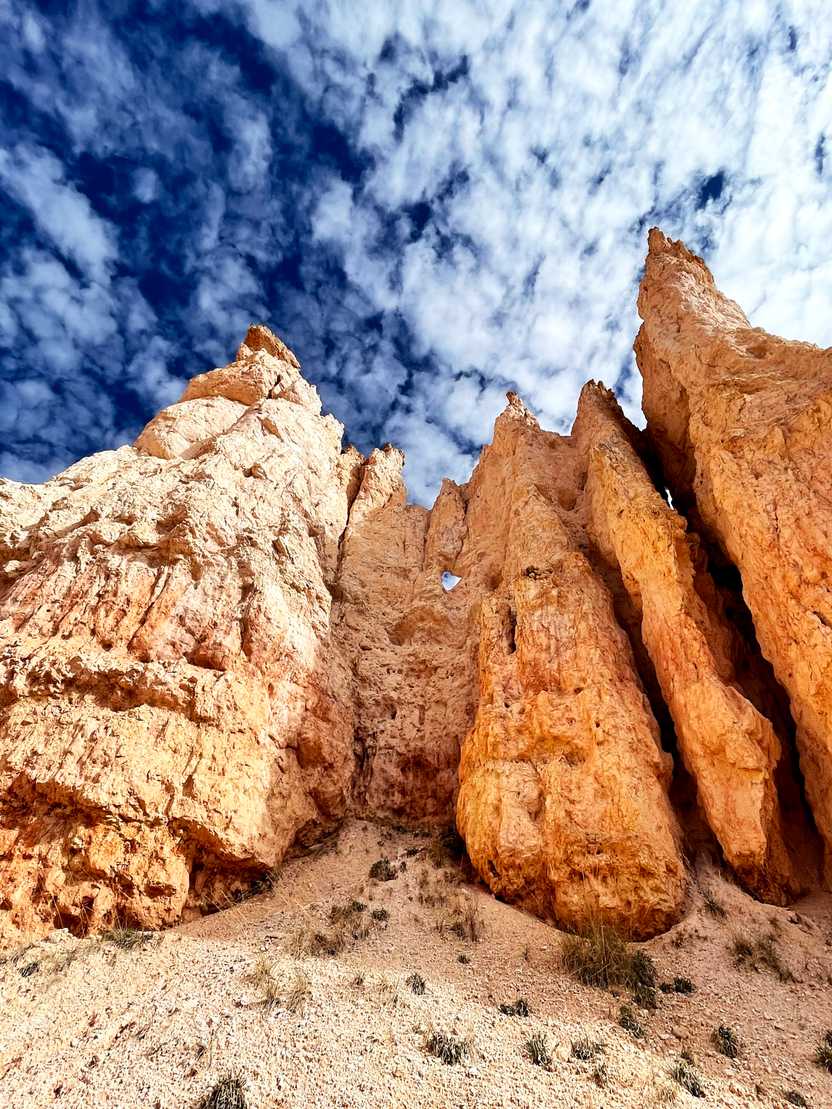 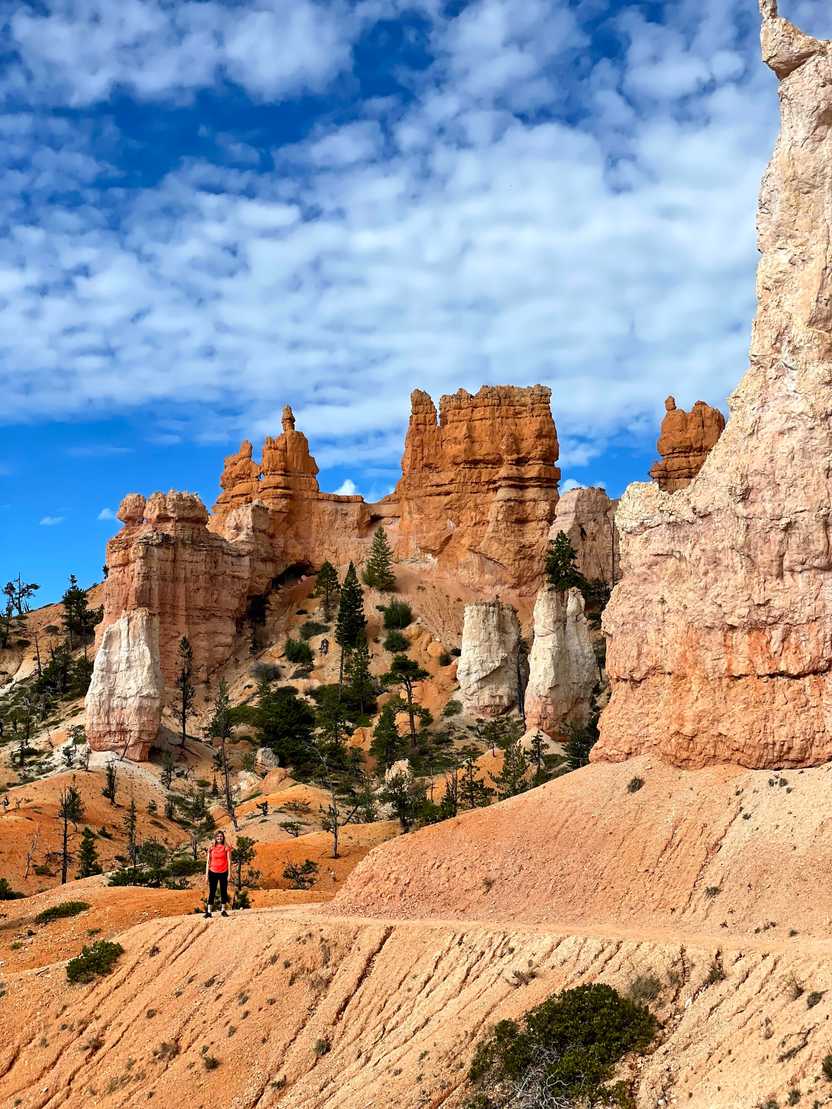 When you enter the canyon, you will descend about 900 feet in two and a half miles. This first portion on the trail has a lot of smooth orange hills. If you hike in this direction, the best hoodoo views are in the second half of the hike. It’s a slow build with views that get better and better as you go. There are still some hoodoos though! You will pass the China Wall as you descend, which is a wall of hoodoos atop a ridge that may remind you of the Great Wall of China.

Another notable stop is the Tower Bridge, which you will find when you arrive at the canyon floor. There is a short spur trail to this iconic rock formation and it’s a great spot to sit under shaded trees and take a break. The rock bears a striking resemblance to the Tower Bridge in London!

After Tower Bridge, there are some ups and downs as you begin to slowly make your way back up to the rim of the canyon. You will cross some washes as you weave up and down among orange hoodoos. Another famous rock formation you’ll pass is the Boat Mesa - a large rock that rises above the Fairyland Canyon to an elevation of 8,073 feet.

The Fairyland Loop was a fantastic trail, but one thing I missed were the orange rock tunnels present on the Figure Eight Trail. Overall, I still highly recommend the Fairyland Loop if you want to take a less trafficked path.

Comparing the Figure Eight Trail and the Fairyland Loop

While both trails are amazing, I preferred the Figure Eight Loop. The Figure Eight Trail has more “bang for your buck” because there are incredible views the entire time, many iconic rock formations and it is shorter and easier than the Fairyland Loop. However, if you are more interested in a less crowded trail that is more off the beaten path, Fairyland Loop is perfect. I recommend spending two days in Bryce and doing both!

Are you visiting Zion National Park during your time in Utah? Check out my Zion blog post for the perfect two day itinerary.

The Best Things To Do in Boulder, Colorado: Hiking Trails, Where to Eat and Where to Stay

The Best Things To Do in Kanab, Utah: Caves, Sand Dunes, Hikes and More

How to Spend 2 Days at Zion National Park

How To Spend One Day in Capitol Reef National Park